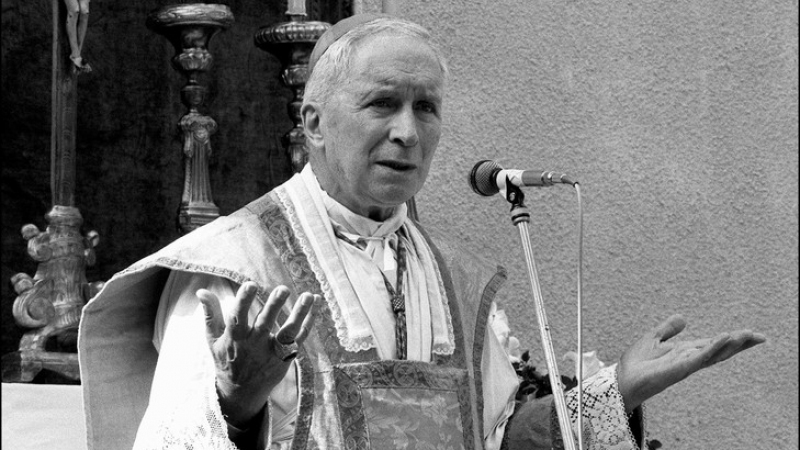 You are most probably aware of the motu proprio “Traditionis custodes” ("Guardians of tradition") which was published this week, which attempts to limit the use of the Tridentine Rite of Mass. It comes as no surprise because the Tridentine Mass, codified by Pope St. Pius V in 1570 is the perfect of expression of faith and worship of the Catholic Religion, which today is the sign of contradiction par excellence of the new religion of man championed by the innovators of the Second Vatican Council and thereafter.

Rather than join the ranks of the hurried writers who have worked tirelessly to analyse and comment upon the motu proprio, I will read an extract of Archbishop Lefebvre’s famous sermon on 29th August 1976 at Lille. It is still fresh.

The New Mass is a sort of hybrid Mass, which is no longer hierarchical; it is democratic, where the assembly takes the place of the priest, and so it is no longer a veritable Mass that affirms the royalty of our Lord.

It is crazy. I would almost say it is a story of madmen. I ask myself if I am dreaming. How can this Mass have become some kind of horror for our bishops and for those who should preserve our faith?

Alas, I received no reply, except for the suspension a divinis.

They tell us: “You judge the Pope.” Archbishop Benelli threw in my face: “It isn’t you who make the truth.” Well, of course it isn’t I who make the truth, but it isn’t the Pope either. It is our Lord Jesus Christ, who is the Truth; and so we must refer to what our Lord Jesus Christ has taught us, to what the Fathers of the Church and the entire Church have taught in order to know the truth.

It is not I who judge the Pope, but Tradition. A child of five with his catechism can answer his bishop very well. If his bishop were to tell him, “Our Lord is not present in the Holy Eucharist.” Well, this child, despite his five years, has his catechism. He answers, “Well, my catechism says the contrary.” Who is right? The bishop or the catechism? ”

Sometimes certain journalists have asked me, “Your Excellency, don’t you feel isolated?” Not at all, I do not feel at all isolated. I am with twenty centuries of the Church; I have on my side all the saints of heaven. Why? Because they prayed like us, they sanctified themselves as we try to do, with the same means.

And so I am persuaded that they rejoice over today’s assembly. They are saying, “At least here are some Catholics who pray, who pray truly, who truly have in their hearts the desire to pray and to honour our Lord Jesus Christ.” The saints of heaven rejoice. Thus, let us not be distressed, but let us pray and strive for holiness.

Now there is some advice that I wish to give you. There mustn’t be divisions among you, as I was saying. Precisely because we are Catholics we are in the unity of the Church, which is in the faith.

[Aside: the unity of the Church is in the faith …not in Novus Ordo liturgy, or ecumenical dialogue, or human rights, or universal brotherhood, or care of the environment, but unity in the faith - a unity which the conciliar Church certainly has not!

To say that the Mass of the Ages is a threat to the unity of the Church is either unutterably ignorant or deeply deceitful for it was precisely the promulgation of the Novus Ordo liturgy which smashed both the unity of liturgy (with its different languages and bizarre - sometimes blasphemous - variations) and the unity of the faith of which the liturgy is an expression and bastion.

Liberals seem to have adopted a strategy of making such outrageous claims (or lies) so as to unsettle their opponents who are left stupefied and confused.]

They tell us: “You should be with the Pope, the pope is the sign of faith in the Church.” Yes, insofar as the pope manifests that he is the successor of Peter, insofar as he makes himself the echo of the faith of all time, insofar as he transmits the treasure that he should transmit.

For, once again, what is a pope if not he who gives us the treasures of tradition, and the treasure of the deposit of faith, and supernatural life by means of the sacraments and the holy sacrifice of the Mass.