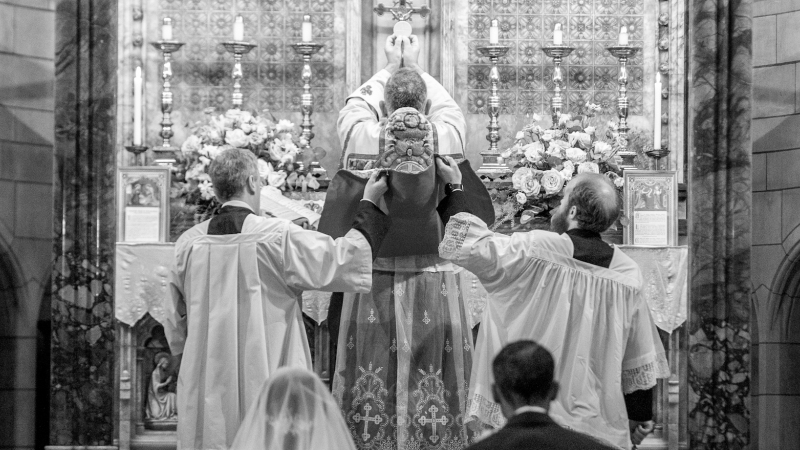 The Tridentine Rite of Mass is the sign of contradiction and stumbling block of the revolution that seized control of the institutions of the Church at the Second Vatican Council (1962-5).

The Tridentine Rite of Mass is the supreme prayer of the Church which most perfectly expresses the doctrine and sanctity of the Church. It is not a passive sign of doctrine and sanctity like a crucifix or devotional picture, it is an efficacious sign, a sacrament which produces what it signifies, a sacrament of faith and holiness, a living banner. It is the moment of victory over sin and death rendered present. It is the means by which that victory is brought to souls across the centuries.

Yes, over the centuries it remains unchanged in its essential parts. It is the same sacrifice, with the same priest, with the same purpose and the same words at its heart as were uttered by Christ Himself. The prayers surrounding the words of consecration (the Canon of the Mass) were added over the first six centuries and were fixed by the time of Pope St. Gregory the Great (590-604). Pope St. Pius V, following a decree of the Council of Trent (1545-63), promulgated the Bull Quo primum to fix the Rite of Mass for all time for the Latin Church. Henceforth the Rite was known as the Tridentine Rite of Mass.

When Church and state walked together, Christendom was organised around the Mass. Hilaire Belloc, in his Europe and the Faith, observed that any medieval historian who does not understand what the Blessed Sacrament is (and by implication what the Holy Sacrifice of the Mass is), cannot possibly understand the ordinary motives of his ancestors and hence the great crises of civil history.

The Mass was the pinnacle, the jewel and the motive force of civilisation. It was the meeting of heaven and earth: God descending; man reaching upwards and touching God.

What happened to the Mass?

Alas, by the fall of Adam, the echo of Satan’s “Non serviam” will reverberate through history until the end of time. Man’s natural desire for the Divinity must always compete with the temptation to make himself God.

Revolutions came and deposed the Church in civil society (Protestant Reformation), then Jesus Christ (the Enlightenment), then God, (the French and Communist Revolutions), then the natural order that He created (the Culture of Death and now Woke Ideology).

The most devastating revolution of them all, however, was the one by which “Non serviam” sounded within the very corridors of the Church. At the Second Vatican Council, man attempted to deify himself and put God at his service.

According to the Council, the dignity of man was no longer held to be his potential to be raised by God’s grace to share in the Divine Life, but was his autonomy by which he was like unto God:

St. Augustine said that “God made man so that man might become God”. This is true if “becoming God” is understood as participating in His Divine Life by supernatural grace, but it is false if it means becoming autonomous as the Council document Dignitatis Humanae suggests.

Man was thus redefined at the Council and so his religion was also redefined. The new religion was the Religion of Man by which men were made autonomous.

The Church of Christ, according to Lumen Gentium is an efficacious sign or sacrament of the unity of the whole human race with Christ. It is clearly a new Church and its faithful are given a new name: “the People of God”.

For a new religion and a new Church, a new liturgy was required. Hence the Novus Ordo Missae was promulgated on 3rd April 1969 and then allowed to mutate freely (see https://catholicherald.co.uk/the-strange-birth-of-the-novus-ordo/ ).

It was indeed a malignant liturgy for it objectively obscured the sacrifice of Christ by presenting the Mass as a meal, and it obscured the sacramental priesthood by turning the priest into the president of an assembly. In practice, by its frequent disrespect of the Blessed Sacrament, it dragged God to earth and treated Him contumeliously. Its effect was to kill the supernatural life of the faithful, dry-up vocations and empty the churches.

After nearly forty years of auto-destruction, Pope Benedict XVI admitted that some blame for the Church’s decline must be laid at the door of deficient liturgy, but he failed to perceive the doctrinal deviance from whence it sprang. In 2007, he promulgated Summorum pontificum which gave every priest the right to celebrate the Tridentine Rite of Mass once more. The result was felicitous, for by exposure to this traditional lex orandi, many faithful discovered or re-discovered the lex credendi of the Church that the Council had sought to supplant.

The Tridentine Rite began to be regarded as a threat to the revolution and its dream of a new Religion of Man; a religion at the service of a New World Order, so much so that Pope Francis promulgated a new motu proprio, Traditionis custodes, on 16th July 2021 to nullify Summorum pontificum and to put in place the apparatus necessary to limit future use of the Tridentine Rite in the conciliar Church.

In the motu proprio, Pope Francis justifies his measures by claiming that the Tridentine Rite of Mass is a cause of disunity in the Church. Such an accusation, like the title of the motu proprio, is not a little ironic, for the promulgation of the Novus Ordo Missae was perhaps the greatest cause of disunity in the entire history of Church. The new rite of Mass broke the unity of liturgy, the unity of language, the unity of culture and, most important of all, the unity of  belief and supernatural life across the world and across the centuries. It was a new liturgy for a new religion, for a false conception of man.

If the Tridentine Rite of Mass may be regarded as a cause of disunity, it is only as a sign of contradiction to the revolution and a stumbling block against which the revolution will ultimately dash itself and be broken.