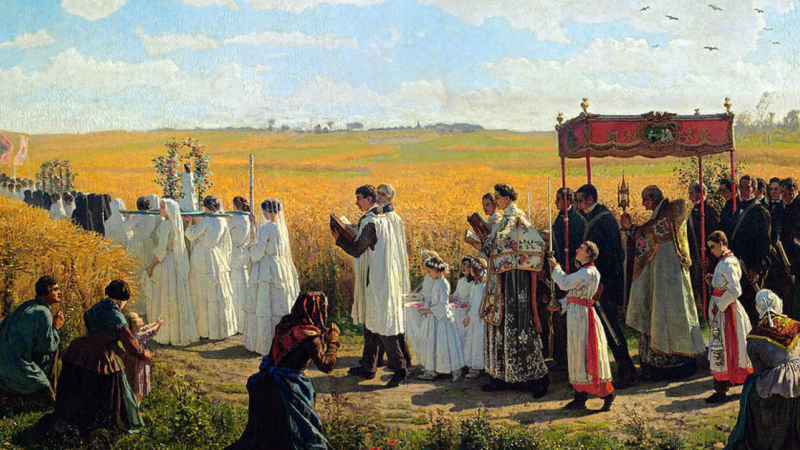 Our Lord prepares for His departure.

the closing act of the work of redemption was to be His ascension into heaven.

The Church prepares for the Ascension

The Church today and during the next few days prepares us for the Ascension, not as Jesus did (by ordering his apostles to teach all nations), but by encouraging us to pray a prayer of supplication. Monday, Tuesday and Wednesday of this week are called the Minor Rogation Days. They were ordered by the 5th Council of Orleans in 511 to pray
- that God’s anger at our transgressions might be appeased,
- to pray for relief in times of calamity,
- and to pray for an abundant harvest (something we should perhaps earnestly consider just now).

At the Seminary of St. Pius X in Ecône, the Rogation Days are still kept with great solemnity as it is an agricultural region and still retains many of its Catholic customs. At 6pm on every evening of the Rogation Days the litany of the saints is begun in the church and continued in procession around the fruit trees and the vines where prayers are said to implore protection against tempest and flood. The procession returns to the church where the Mass of Rogations is sung before packed congregation.

Modern forgetfulness of dependence on God

Here in the modern world, unfortunately, the Rogation Days have fallen into abeyance. We no longer depend upon the weather, or upon harvests; we depend upon the supermarkets.

It would be strange for us process around the lawns imploring God’s help and protection that they might grow, when in fact we want them to stop growing.

It would seem peculiar too if we were to process around offices incensing the computers to ask that God might protect them from infestation or lightning even though these problems do really afflict them and even though  we rely upon them for our daily bread.

But my dear brethren, despite our science and technology, we are still just as dependant on God’s Providence as any man ever was. We might not starve today physically, but morally we are afflicted by raging storms on all sides.
- Almost every moral aberration is now inscribed in the law of this land or is destined to be so before too long.
- The state seems to want to kill your children before they are born, or corrupt them if they are born and then kill them when they are no longer useful at the end of their economic lives.
- And the bishops are collaborating with the wolves.

But the moral storm that we must fight first, my dear brethren, is not the one outside of ourselves, it is the one inside our hearts:
- the storm of our wayward inclinations,
- the storm that makes us repeat time and time again the same sins in the confessional,
- the storm founded in our pride, our disordered self-love
- the storm of man who forgets who he is. As the reading says,

For if a man be a hearer of the word, and not a doer, he shall be compared to a man beholding his own countenance in a glass. For he beheld himself, and went his way, and presently forgot what manner of man he was. (Jam 1:23)

Pray for an end of the spiritual drought

It is fitting therefore, my dear brethren, that we join the Church in her preparations for the Feast of the Ascension by praying that the drought of godliness in our personal lives might be brought to an end by a shower; a shower
- of healing grace,
- of elevating grace,
- of the theological virtues of faith, hope and charity,
- of the moral virtues of prudence, justice, fortitude and temperance,
- and of the Gifts of the Holy Ghost at Pentecost.

Let us pray to Him, our Intercessor at the right hand of the Father, through His Blessed Mother (perhaps by reciting the Litany of the Saints over the next three days) confident that if we ask anything in His name we shall receive it.