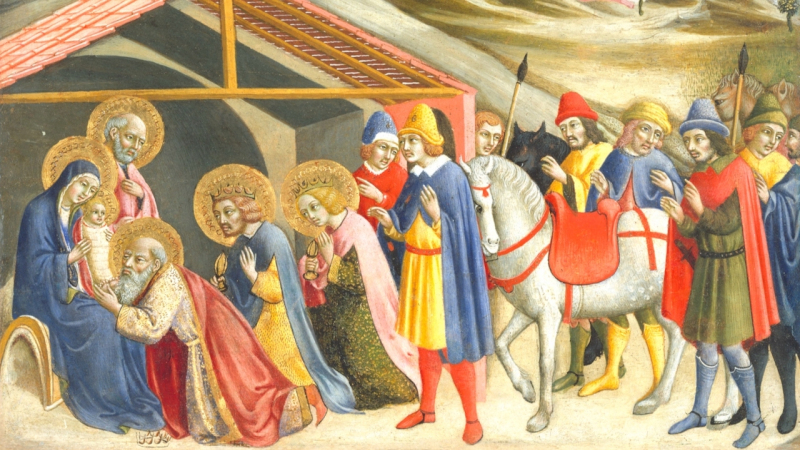 The new year begins with a sense of foreboding, as if we were on the eve of war. Western society is disintegrating because it no longer has any culture to unite and direct souls to a common good. Rationalism, materialism and capitalism have run their course and have been found wanting; the global elites now look to technology and coercion to shore-up existing structures while they prepare a new order of things to maintain their hegemony. This new world order will be an atheistic tyranny, most probably like China's but with even more unnatural vice; and then it will collapse in its turn, but not before much suffering and the eternal loss of many souls. Hence the foreboding.

The only thing that can save the world is the Church, that institution founded and headed by God Incarnate, Jesus Christ, with a visible hierarchy of ministers whose duty it is to continue the mission of Jesus Christ on earth: to teach, govern and sanctify souls. The Church is Christ in the world: a sign of contradiction, a  city seated on a mountain, a teacher of truth, an upholder of natural and divine law, a maker of saints.

Unfortunately, the Church is in crisis too. While she is spiritually perfect as the Mystical Body of Christ, she is bodily ill because so many of her ministers seem to have lost the faith. Collectively, they ate of the fruit called Modernism at the Second Vatican Council, which touted a new understanding of the faith, a new conscience, and a new Pentecost, but which then delivered a spectacular collapse of faith, morals and membership.

Satan's success will not last however, for not only does the Church have a divine guarantee, she is also a perfect society, possessing by her nature all she needs for her perfection. The Church has the power to heal herself in her body. This power comes from the same act which objectively redeemed the world, the Sacrifice of Calvary, which is made present and fruitful until the end of time by the Holy Sacrifice of the Mass.

The Mass teaches the mystery of faith, it orders souls to God, it sanctifies all who assist worthily. It is the perfect fulfilment of the Church's mission to teach, govern and sanctify. The Mass is the defining act of the priest, turning him into the source of holiness Who is Christ, making Christ present in the world in his person and in the Blessed Sacrament confected during the Mass.

It was Satan's greatest triumph, therefore, to see the full weight of Church authority misused to replace the traditional rite of Mass with a sickly, protestant-friendly rite called the New Order of Mass. The New Order of Mass is still valid as a rite of Mass, but it is deficient in its ability to teach, order and sanctify souls. It gradually saps the faith, morals and spiritual life of those who assist, as the last 50 years has amply shown.

But this new rite will not last, for in God's economy of justice, which draws a greater good out of every evil, this misuse of authority will become the occasion of the Church's wonderful renewal. Indeed, this process has already begun.

During the Second Vatican Council, Archbishop Marcel Lefebvre was among many who fought against the Modernism that ultimately triumphed at the Council, but he was one of very few who both discerned the "masterstroke of Satan" and had both the prudence and fortitude to confront it. It is not hyperbolic to say that Archbishop Lefebvre began the renewal of the Church.

Here are his words in a conference at Ecône on 30th May 1970, shortly after the forced introduction of the Novus Ordo Missae on the First Sunday of Advent in 1969:

That which remains an absolute duty is to safeguard the faith. And the Mass is the most lively expression of it, the divine spring, which is why it has supreme importance. No one has the right to make us lose our faith.

What can I say? We are living in circumstances that are truly dramatic. Perhaps God has allowed us to be here, and in a few months, there will be 50 of us. Perhaps in a few years, we will be 80 or 100 in number to continue the Mass [in the traditional rite], so that there will continue to be Masses where Our Lord is present.

Now, it is not possible that we give up a rite that has lasted for centuries, which comes from the apostles. We will keep the rite of St. Pius V – St. Pius V only codified the rite.

St. Thomas explains the rite of the Mass. For example, the "Mysterium fidei" in the consecration, St. Thomas says that it comes from the apostles. It's not something insignificant. Our Lord most certainly gave them this teaching. If it came from the apostles, then we have to keep it as something precious within the rite, so that we may keep our faith. If we take it out, we won't know where we are; we won't know if the formulae we possess are valid. We would be lost.

On 1st November 1970, the Society of St. Pius X was officially founded for the formation of priests to offer the Holy Sacrifice of the Mass in the traditional rite. Soon, Archbishop Lefebvre, faithful to this mission, was to incur canonical penalties: most notably a suspension in divinis in 1976 for ordaining priests without permission and excommunication in 1988 for consecrating bishops without a mandate. He considered the penalties null and void of course, for he acted in good faith and for the Faith.

Interestingly, just over 50 years later, the so-called Ecclesia Dei communities, who were permitted to offer the traditional rite of Mass on condition that they officially accepted the Second Vatican Council, find themselves at a similar fork in the road.

Following the recent publication of the motu proprio, “Traditionis custodes”, which imposes the New Order of Mass (and the new ritual – a new, supernaturally impoverished rite of the sacraments) on these communities, they are confronted with the choice of either continuing their apparent obedience to the hierarchy or following Archbishop Lefebvre's example in defence of the faith.

As we begin the new year of grace, let no foreboding of the future lead us into the lethargy of melancholy, but quicken us that we too might be prepared to give up everything to safeguard the faith, to be always God’s servant first.

Pray for vocations, pray for the Ecclesia Dei communities, and pray for all priests who find themselves at the same juncture. Pray for the Pope – that he might see that the real solution to the problems of the Church and the world is not, political, economic or ecological, but spiritual. The real solution is the restoration of the Holy Sacrifice of the Mass according to the rite of St. Pius V.

I wish you every grace of Christmastide and the Epiphany for the new year ahead.